We regret to announce that the European solo acoustic tour with Tony Dekker of Great Lakes Swimmers has been postponed due to the COVID-19 outbreak. We hope to reschedule for the near future. Like many of our peers who have also had to cancel tour dates, this has dealt a huge economical and emotional blow to everyone involved. If you are inclined, check out our shop which is carrying our latest LPs, and will soon stock the limited Great Lake Swimmers/Picastro split 7″ tour exclusive that was meant to accompany us on this trip. http://www.greatlakeswimmers.com/shop/ Thanks for your support and understanding and we hope to see you down the road soon.

We hope to get a couple of Canadian shows together sometime in the summer depending on how things pan out and will have physical copies for sale then too.  Thank you, visit www.https://picastro.bandcamp.com/music for old and new releases.

More reviews are coming in for Exit, check them out! 2020 dates will be announced soon.

Final round up of shows coming up! Come check it out, full band show in Toronto as well.

Scandinavia, all shows with Noemie Nours and Danny Oxenberg (of Supreme Dicks)

October 30.  Oslo, NO.  Hausmania with Slowburn (no Danny Oxenberg)

November 6.  Toronto, ON.  The Burdock with Jason Anderson.

Got a couple of shows coming up and am planning European dates for 2010.  Get in touch if you want to see me play!

The tour in Portugal & Spain was great! I’ll be adding more shows to the page as they come up.  Vinyl copies can be purchased at She Said Boom and Pandemonium in Toronto,  also available here:  https://store.sleepinggiantglossolalia.com/product/picastro-exit-lp

Check out these early reviews of “Exit”:

June 21: Hamilton, ON.  Something Else Festival.   The Rock on Locke, Church of St. John the Evangelist.  7pm

“Exit” will be coming out on Sleeping Giant Gloassolalia in 2019.  http://www.sleepinggiantglossolalia.com/discography/

The record took years and through the process went through some ethno-musicology to figure out what I was grappling with and why I never wanted to put myself forward as a female singer.  I despise album covers featuring women so artfully (and sometimes not so artfully) displayed as if they were somehow part of the “product” you were buying.   As an experiment, I took out my voice on this record to change my relationship with it.   I also discovered that in some cultures, females performers were really more suited to private family events but once their fertile years passed, they could be deemed just as proficient and accomplished as their male counterparts.  Of course, this wasn’t true in other cultures where performers were actually expected to take on the appearance or aura or of both genders.    A lot of my friends thought I was being reductionist and maybe I am; it is as much a danger to define your identity by rebelling against the de-facto norms of male, white, straight music as it is to ignore it and pretend you are not being played by it at all.    And that was what I resented most I suppose.

So here it is.  A meta-meta cycle of songs based on destroying the muse,  the disappointment of adult hood and absorbing whatever it is that defines you; addiction, love, anything you want.

Saturday January 12 2019.  Toronto release show.  Baby G, with Fresh Snow and Colin Fisher,  art by Bill Fussner if we can swing it!

Spain and Portugal dates listed below, I’ll fill in more info as it comes, please get in touch if you want a show or want a t-shirt!!

I can’t believe the last show I played in 2018 was at Adobe Books in San Francisco in February! I’ll be playing a solo show on October 16 at Baby G in Toronto and this might be it until our release show in January with European dates to follow in February.

Get in touch if you want a show! 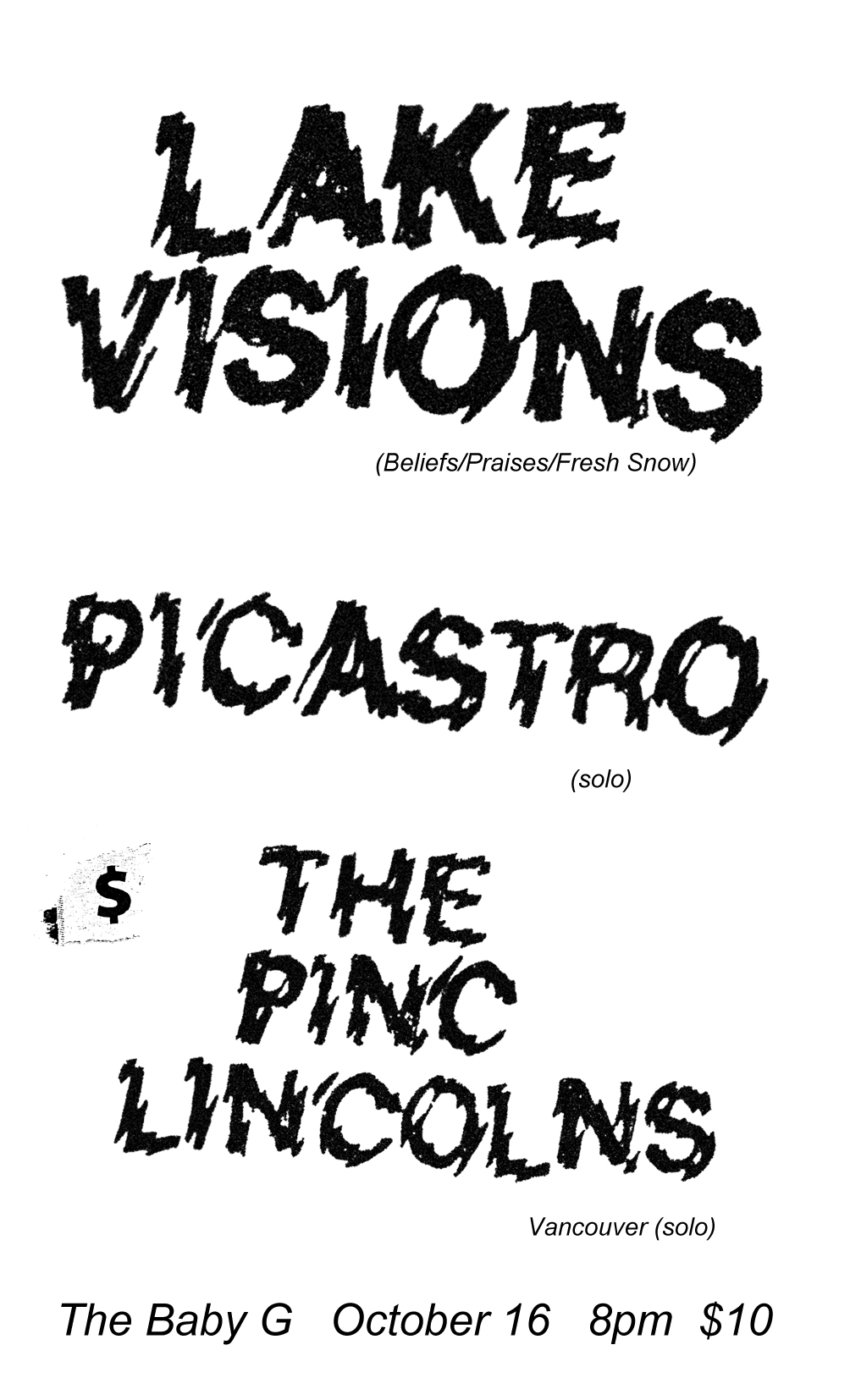 My last show in San Francisco at Adobe Books was amazing, thanks so much!

I have been thinking about how nice it is when someone travels to see you play and this exchange I did a few years back where I traded hand written lyrics for small bits of cultural treasures.  If there is a a yummy local hot sauce or something shippable, I am still into this idea.  Might be nice given how no one receives presents or letters anymore, right?

My Tweets
picastro
Create a free website or blog at WordPress.com.